A few months ago, my friend Edwina Moore asked me to write a guest post for a series she was doing on time management and accountability for writers. What ended up spilling out of me was a lengthy confessional about how I almost stopped writing 2.5 years ago and how I’ve slowly, slowly been trying to rebuild my writing practice since then. It’s a story I didn’t think I’d ever tell anyone, to be honest, but for what it’s worth, this is where I’m at.

I am jealous of readers because they get to see my work wholly divorced from its writing. A project will always be tied up with its history for me. Did I write quickly and painlessly? Was the writing a struggle? Did I “save” the project in revision?

When I reflect on my books, I prefer the hard ones. Because I am a slow and ponderous writer, and thus I tend to wander down many wrong paths, I haven’t had too many books go “well.” Those that have… I don’t trust. They’re some strange witchcraft; they don’t feel like mine.

But a reader doesn’t know any of that. There isn’t any noise around the book. It must be quiet.

Lately, I’ve struggled to write because there’s so much noise, I can’t hear myself. I have writer friends who can listen to the market, to their readers, and to industry trends and still have something outward to say. I’ve been trying to do that, to write books that might be for a more general audience rather than only for my little niche, to listen to the outward stuff and modulate my voice in terms of it. But I simply can’t.

I’ve been trying to tune out those outside noises–not because they’re unimportant, but because I can’t hear myself or see my work. I’m snow-blind.

I read a piece on Lit Hub today about the view of American literature from abroad. For what it’s worth–which is not much–here’s the list of 25 titles I settled on. They’re numbered for my own count, but aren’t in any particular order. I’ve omitted Faulkner, Salinger, Kerouac, Nabokov, Twain, and Toole (all of whom appear on the Lit Hub list) because they’ve never appealed to me personally.

This is slightly edited and corrected (in other words, IMPROVED) from the Twitter version. I’m reprinting it here because it seemed like a suitable celebration of the Fourth of July.

I don’t have enough poets, and probably not enough non-fiction/biography/dramatic literature; there’s also a dearth of the nineteenth-century female novelists I love so well but whose work is both long and problematic. But it’s a list of works that speak to this national project: its high idealism, its deep and repetitive failure, and the hope we still hold, must hold, for the future.

END_OF_DOCUMENT_TOKEN_TO_BE_REPLACED

This started out as a conversation on Twitter. Since I have longer thoughts, I’m expanding on them here.

There was an interesting profile in the Washington Post this morning called “Love Thy Neighbor?” about a Minnesota doctor named Ayaz Virji. Dr. Virji began to feel uncomfortable in his small town after the election, and so he made several attempts to talk to his neighbors after his Muslim faith in order to (perhaps) change their minds. I’m not doing the piece justice; the entire thing is worth reading.

For my purposes here, it’s the last bit that interests me the most. Around the election, there were a host of articles about voters experiencing economic anxiety that led them to support the candidacy of the current president. For example, sociologist Arlie Hochschild wrote one for Mother Jones detailing the five years she spent interviewing people in Lake Charles, Louisiana, in order to understand their lives and world views.

But a notable difference between today’s Post article and Hochschild’s (and the other authors I’d put in this category) is that the latter never attempted to change her subjects’ minds. To be clear, I don’t mean that as a criticism; I’m describing a difference.

It might be, however, that it’s impossible to change minds as Virji attempts to do because people aren’t persuaded by facts. In fact, research suggests that confronting people with facts that are counter to their worldview can lead them to become defensive, to dig in, and to become, in other words, less likely to change.

I could make a bunch of political points about this, which I’m purposefully avoiding, but the pieces also raise writing questions, including: do people, and by extension characters, change? if so, what motivates them to change? how can I write change realistically?

END_OF_DOCUMENT_TOKEN_TO_BE_REPLACED 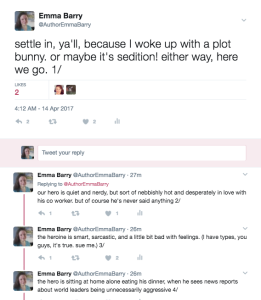 I just outlined a novel loosely inspired by current events on Twitter. I will never write this book, but if you’re looking for something hopeful, something cheerful, it starts here. 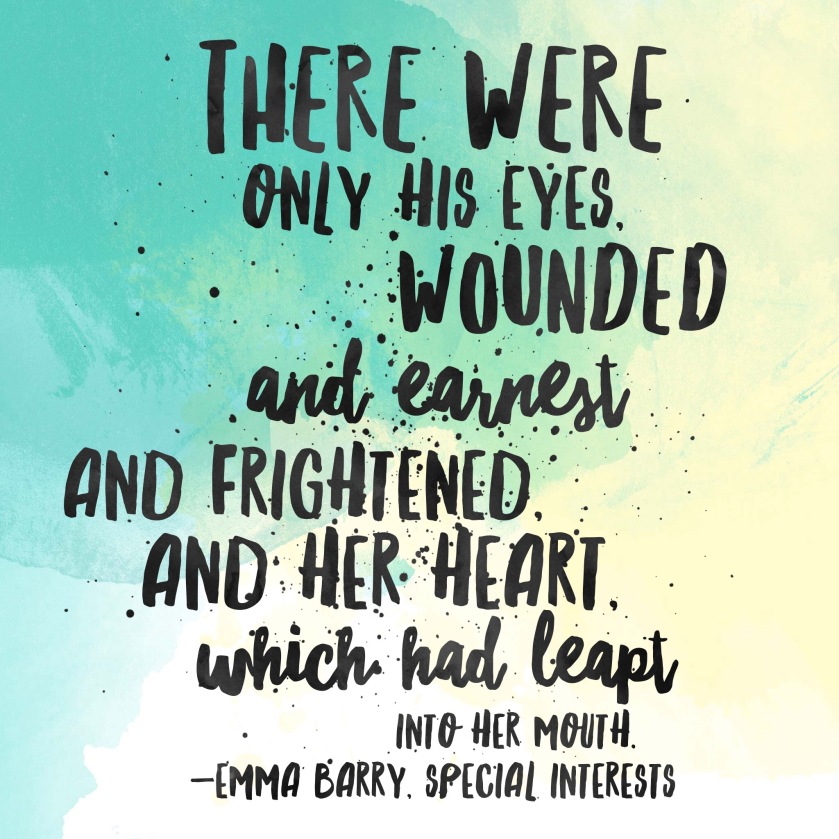 According to Facebook’s anniversaries, Special Interests released three years ago today. It’s been a rough week for me writing-wise, but this anniversary feels significant. I’ve talked before about how the theme of the series is having your life not go according to plan and trying to remake yourself, to imagine your life differently, in the face of that. It’s optimistic about self-growth, an idea I find even more relevant and encouraging today.

Two weeks ago, my kids were sick, which isn’t in itself terribly interesting. But it was the first week-long illness of their lives, and their first full week out of school. And that meant it was also my first extended period playing the nurse version of mom.

When instinct kicked in, I administered Ginger Ale with the bubbles stirred out and put on The Price is Right–because there is no cold that cannot be conquered by that combination.

My kids weren’t in the least intrigued by Bob Barker, probably because they’re kindergarteners. Instead, it was Moana marathon for us. But they were curious about the flat Ginger Ale.

END_OF_DOCUMENT_TOKEN_TO_BE_REPLACED

I find myself staring at the moon more and more.

It started in 2014 when Genevieve and I began writing Star Dust (yes, we’ve been working on this series for that long). The core of that book is the hero and heroine sitting in the dark saying things they wouldn’t otherwise. Secret confessions and wants and dreams and hopes, all accompanied by the stars.

To write those conversations, I would walk Gromit, my dog, late at night and contemplate the few constellations you can see in my suburban neighborhood. There is a lot of light pollution, but Orion is there. So is Taurus, which Kit shows Anne-Marie how to find. But mostly the moon dominates the view.

There are nights when the moon is so beautiful it hurts to look at it, and I can only manage a few brief glances. When it’s full, it seems so close I’ve reached up as if to nudge the craters with my fingertips. Lately, it’s been a gold scythe in the sky slicing through the blackness.

END_OF_DOCUMENT_TOKEN_TO_BE_REPLACED 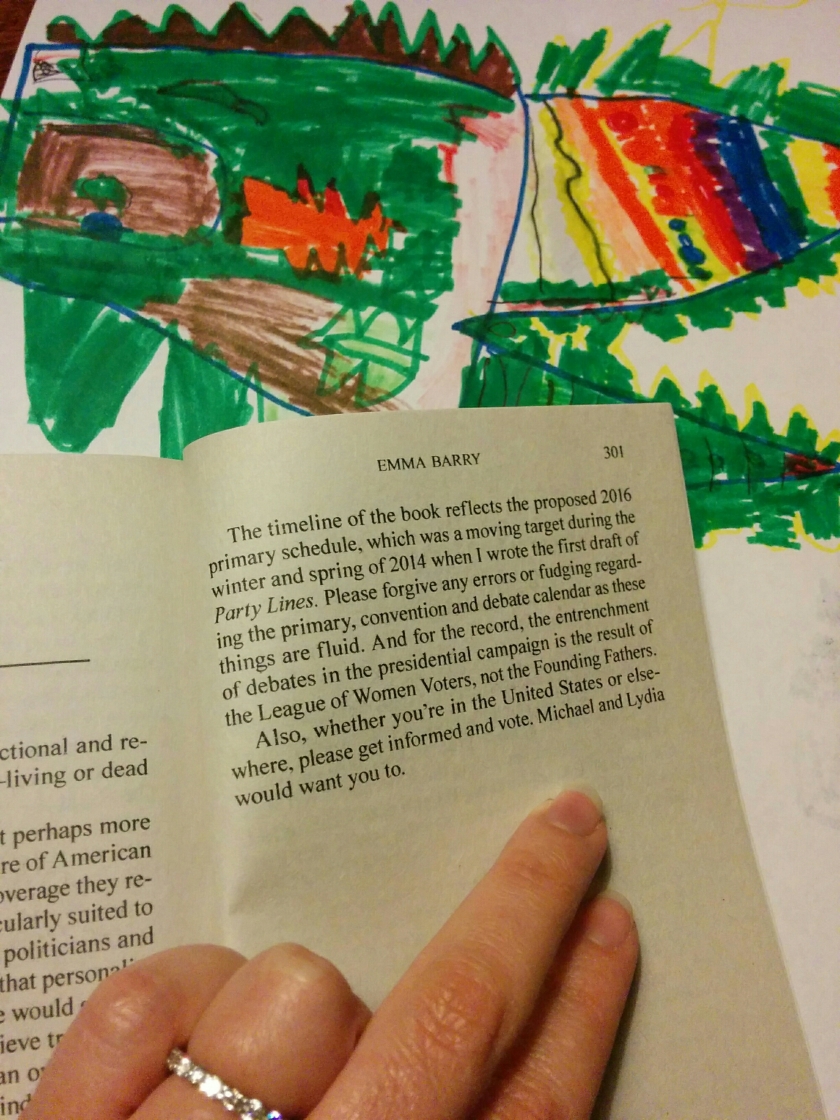 If you’re in the United States and you can, please vote. As I said in the afterward to Party Lines, Michael and Lydia–probably my personal favorite couple from any of my books–would want you to. If you’re not certain where your precinct is or what’s on your ballot, Google will help you (search “where is my polling place” or “who is on my ballot”). Yay, democracy, y’all!

ETA: oh, and if you need a distraction, A Midnight Clear will only be free for another week. Joe Reynolds would be happy to keep you company while you sit up late waiting for election results. 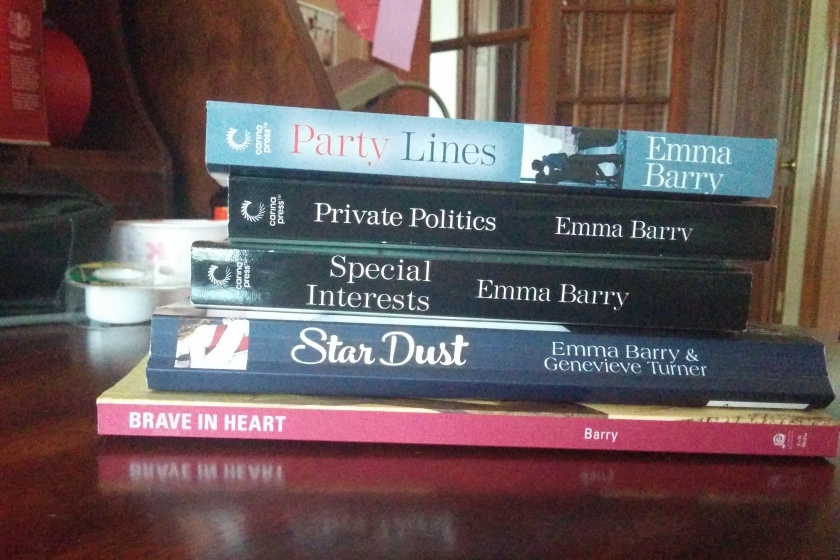 My total words written this year is again in the 100K-range, which isn’t where I’d like for it to be, so I need to get that side of things in gear. I also read 50ish new-to-me books (plus I did a lot of comfort re-reading).

My goal for next year is to publish (or republish) four projects, to query agents with the contemporary romance I’m writing, and to work more consistently and happily and with less self-consciousness.