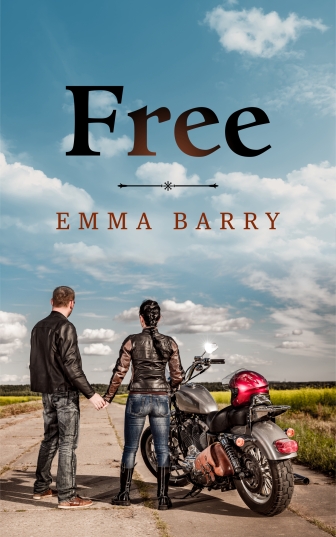 Brad White would be an ordinary accountant with an unrequited crush except for two things: he works for a criminal motorcycle club and he’s in love with the club president’s daughter. When she discovers the truth about the family business, Brad has to move beyond ordinary and put his life on the line to keep her safe.

Wren Masters, unlike everyone else in her graduating class, chose to stay in Fallow, Montana, because unlike everyone else, she loves it. But when she finds out her father’s club is running drugs, her family and world crumble. She and Brad risk everything to uncover the truth . . .and begin a scorching affair.

As the conspiracy—and their feelings—deepen, Brad and Wren must choose between family and justice. And neither seems to include a future for them.

Ethics were funny things. I liked to think mine were intractable, that the line between what I would and wouldn’t do was so bright they could see it from space. Then Wren Masters would stroll into our office, and I’d have to face the truth—I was a liar.

I flipped the coffee maker switch back and forth a few times. Several seconds passed before the light sputtered on. It was a crummy machine in a crummy town, so the hesitation was honest enough.

No, my lying had nothing to do with the town or even the office itself, a prefab from the seventies standing in front of a used car lot and garage. It was more about who owned this shitty establishment and what they used it for: the Lone Gun Motorcycle Club, and drugs.

To the rest of the world I was an accountant. I didn’t wear a pocket protector, but it didn’t matter; I was the moral, boring type. Except I knew I was aiding and abetting felons.

Take this morning. I had more than enough evidence that my ethics were worth jack even before I watched Wren stride toward the building, her brown-blonde hair streaking out behind her like a sail, before I scrutinized the roll of her hips and the cling of her blouse—could something that tiny be called a blouse?—before I could see how the anemic October sun lit her face. Because while I might be a good accountant in the absolute barest sense, what I did for Lone Gun wasn’t good.

When Wren propped the door open, said, “Morning, hot stuff,” and my stomach flip-flopped like a pancake, I knew my motives—lifelong unresolved lust—made what I did even worse.

“Morning yourself,” I muttered.

My lies started then and would go until I left at the end of the day.

© Emma Barry, 2017. Unauthorized use and/or duplication of this material without express and written permission from this blog’s author and/or owner is strictly prohibited. Excerpts and links may be used, provided that full and clear credit is given to Emma Barry with appropriate and specific direction to the original content.

© Emma Barry, 2012-2020. Unauthorized use and/or duplication of this material without express and written permission from this blog’s author and/or owner is strictly prohibited. Excerpts and links may be used, provided that full and clear credit is given to Emma Barry with appropriate and specific direction to the original content.