“So what kind of Jello salad are you making?”

As soon as I announced this project, this was the question everyone asked. The dish people most closely associate with the 1960s seems to be Jello, preferably with lots of strange stuff in it.

The only problem was, well, I wasn’t finding many Jello recipes in the cookbooks. This leads me to a few hypotheses: one, I may have had too small a sample size and needed to do more research; two, Jello salad might have been a regional or folk thing where people developed and circulated their own recipes apart from the cookbook industry; and/or three, our historical memory about this might be off. I definitely didn’t put any Jello in Star Dust.

Regardless, the Internet filled in some blanks. If you’re interested in molding Jello, I would recommend that you read Elisabeth Lane’s post about a peach Jello mold, which was inspired by this recipe at The Kitchn, or dive into the deep end by reading the archives of The Jello Mold Mistress of Brooklyn. You’ll also need to peruse your local thrift store for some molds.

I ended up making two Jello recipes: a very weird one that did not work and a more modern one that did. You get the weird failure today.

I’m going to reproduce it as it appears in the cookbook and then explain what happened.

Soak the gelatin in cold water, then dissolve in the hot water and add the sugar, fruit juices, and zest. Chill in a pan of ice water and when beginning to jell, fold in the egg whites. Turn into a 6-cup mold and chill.

All of this sounds pretty good, right? But it just did not work.

But when I tried to fold in the egg whites, my Jello was viscous like thin pudding; it easily coated a spoon and said spoon would leave an impression. I thought that’s what Corbitt meant by “beginning to jell.” But in this state, the egg whites just sort of floated on the top. I couldn’t fold anything.

Eventually, I ended up whisking the egg whites in and putting the entire thing in the fridge. But after 36 hours, the Orange Moss wasn’t set and I gave up. 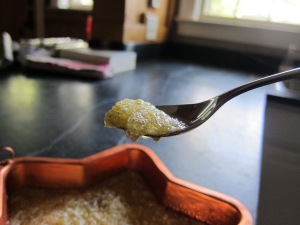 As you can see, there was a thick layer of Jello on top, consisting of orange zest, little bits of egg white, and gelatin. Underneath it was basically thickened orange juice.

If you’re wondering how this spoonful of Orange Moss tasted, I’m struggling with the words. Let’s go with texturally revolting. However, because of all the zest and the fresh fruit juices, it smelled amazing. I was actually sad to toss it. (And isn’t that an adorable mold? It’s much cuter than the one that worked.)

I suspect that if you want to make Orange Moss, the Jello would have to be much more set than it was and that you’d need to replace the egg whites (which are probably safe to eat uncooked but maybe not) with something like Cool Whip. Or maybe make something like Swiss meringue and then fold it with your almost-set Jello.

I can’t say that I would make this again, but it was certainly interesting. More retro cooking to come!