A year ago, I was finishing the first draft of a book. A book about a snuggly blogger hero and the socialite fundraiser he loves from afar. About a scandal and money and influence. About finding yourself and shattering others’ expectations. And about shoes–lots of shoes. 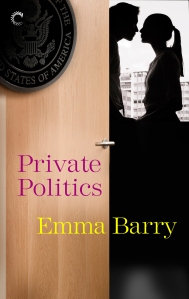 That book, Private Politics, is now out! And you can buy it at cool places like Amazon, B&N, Carina, iBooks, Kobo, All Romance, and Google Play or add it to your Goodreads shelves.

I had to write Special Interests, the first book in the series. Millie and Parker wouldn’t leave me alone. Writing was an attempt to excise them from my head. That translated into the intense chemistry between the characters.

Alyse and Liam were different. Writing their book was scarier because my publisher had bought it on spec and I was worried about living up to their expectations. But it was also the first thing I’d written where I felt confident about myself as a writer–where I thought about myself as a writer at all. And for that reason, it’s a very special book to me.

To celebrate its release, I’m going to gift three (3) copies to lucky winners. In fact, the winners can decide if they’d prefer Special Interests or Private Politics, in case they haven’t yet dipped their toes into the world of my sexy, smart, overworked, and frequently hilarious political aides.

So enter today. As Rafflecopter and WordPress don’t get along, here’s the link.

And, to whet your whistle, a third and final entry in The Easy Part series will be released on January 12, 2015: Party Lines. Because if you thought DC was fun, you haven’t met the campaign trail.