I have heard lots of authors say that their imminent publication started to seem real only when they saw the cover for their first book. Well, add me to that list.

Up to this moment, the thought of being published had a hazy, surreal, day-dreamy quality. The process just didn’t seem that different from what I’d already been doing. I’d been getting feedback on and revising Brave in Heart since last year, so it wasn’t like that was new. I’d been thinking about marketing the book for a long while, so actually starting to do so was sort of dream-like but not all that unusual.

But looking at the cover leaves me a little speechless. My manuscript is a book, a real, live book. How odd. How delightful.

Enough preamble! Do you want to see it? Well, follow me below the fold. 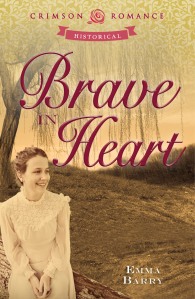 My two favorite scenes in the novel take place underneath a willow tree, which is where the cover designer got the idea. And since I tend to be a word + image girl, here’s a teaser of one of those scenes.

She released Theo’s arm and walked a few paces from the willow to look out to the river. The water nipped at the narrow beach, each soft, lapping wave an enticement to the past.

How many times had they sat here? Would they ever do so again? Was it possible to stay forever like this, here and together?

He laughed too, but then his tone turned serious. “I need to know why you have been so cold.” He didn’t ask—he demanded.

She set her jaw and said through her teeth, “Nothing is wrong.”

He clicked his tongue in frustration. “If a lifetime stretched before us, I wouldn’t push. I would wait for you to tell me. But I leave in the morning, so I insist. Have I done something? Hurt you in some way?”

She turned toward him. He was sprawled out under the willow tree. In shirtsleeves with the breeze making his hair flutter, he looked quite the youth. She couldn’t let him believe he’d done something wrong.

“No,” she said, shaking her head. “You have been nothing but honest and fair with me.” It was true.

“And yet you are angry.” He wasn’t surprised. There was something rich in his eyes that she didn’t understand. She wanted to fall into them but she knew not what awaited her.

“Not well. Not happy. You were—at least it seemed like you were at first.”

She bit her lip and took a few steps to him. “I have become…confused.”

“About why we married?”

Margaret settled herself next to him on the grass and pulled off her gloves, inspecting the blades she brushed with her hand. Each tickled her fingertips. A dappled ray of sunlight made her wedding band gleam. “Yes. I do not understand why it was necessary for us to marry. Was it only my compromised virtue?”

“Don’t make it less than it is,” he said, taking her hand. “I was selfish, very selfish, that night. But I did it because…” He trailed off. He unbuttoned her cuff and allowed his fingers to trail up inside her sleeve, tracing patterns on her wrist and forearm. Margaret’s lids drifted closed.

“Look at me,” he whispered. Margaret opened her eyes and locked onto his, afraid of what was coming but desperate to hear it all the same.

To find what he’s about to say, I guess you’ll have to wait for July 1.