I’m fascinated by opposites-attract love affairs. All romances include components of this; we don’t want to see people who are too similar fall in love–where’s the fun in that? But some chasms are more difficult than others to bridge. And in politics, party affiliation might be the most charged of all.

A year ago, I was writing a book about a secret affair on the campaign trail between two ambitious, jaded people who can’t seem to shake each other. They yield to the inevitable…and well, things get more complicated from there. There is banter and lots of clandestine meetings in hotel rooms. There’s a scandal and an election. And despite all their best intentions for there not to be, there just might be love too. 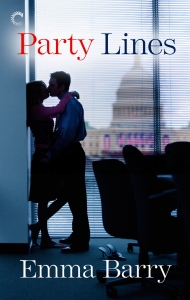 That book was Party Lines and today it’s available at Amazon, B&N, Carina, iBooks, Kobo, All Romance, and Google Play. You can also add it to your Goodreads shelves.

I’ve written about it here, but also elsewhere. A few other pieces will go up throughout the week and I’ll update this post as they do.

– If you haven’t already, check out the book’s Pinterest board. It’s mostly music (no pictures of Michael and Lydia); if you email me, I’ll share my secret celebrity inspirations.

–  At the Carina blog, I wrote about the folks behind the podium and why they’re the heroes and heroines of The Easy Part series.

– Also at the Carina blog, I wrote about the thin line between love and hate.

Emma is a novelist, full-time mama, recovering academic, and former political staffer. When she’s not reading or writing, she loves her twins' hugs, her husband’s cooking, her cat’s whiskers, her dog’s tail, and Earl Grey tea. View all posts by Emma

© Emma Barry, 2012-2020. Unauthorized use and/or duplication of this material without express and written permission from this blog’s author and/or owner is strictly prohibited. Excerpts and links may be used, provided that full and clear credit is given to Emma Barry with appropriate and specific direction to the original content.