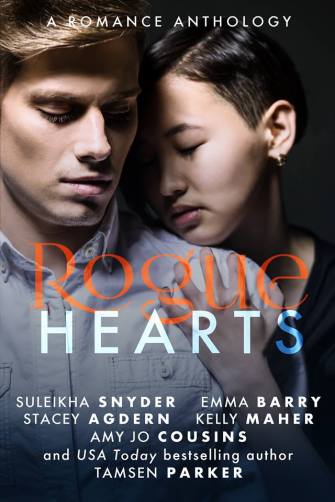 From high office to the heartland, six brand-new romances about #resistance for readers who haven’t given up hope for a Happily Ever After…

In Her Service by Suleikha Snyder

U.S. Vice President Letitia Hughes has one thing that’s hers and only hers: her relationship with much younger Secret Service agent Shahzad Khan. When push comes to shove, what will take precedence: political ambitions or protecting their hearts?

Public defender Maddie Clark doesn’t want to be a candidate for the state senate—but she’s running. Her high school nemesis turned campaign advisor Adam Kadlick shouldn’t be back home managing campaigns—but he is. They definitely should avoid falling for each other—but they won’t.

The Rogue Files by Stacey Agdern

Reporter John DiCenza wants to go back. To New Jersey, to his life, the hockey team he covers, and the fanbase he’s proud to know and support. Back to before he had the Rogue Files, documents rumored to be the final nail in President Crosby’s term.

Journalist Sophie Katz wants to move forward. Toward her new TV show, and a life where the stories she tells will make a difference. She needs the Rogue Files and the story behind them to get there.

But when life comes at them, John and Sophie realize that the true story behind the files is standing up for the truth right where you are.

Coming Up Rosa by Kelly Maher

When her mother’s health crisis forces Rosa Donnelly back to her hometown, she crosses paths with her former crush, and town golden boy, Ian Stroman. Ian’s shine is even brighter thanks to his advocacy work to fight inhumane government policies. However, their past hurts and a current business threat may spike their chance at happiness.

There’s a new sheriff in Clear Lake and he has Eli Devine, the town librarian, on edge. Between arguing with the town council about inclusive library programming and keeping his three grandmas from getting into trouble, Eli has enough on his plate already. He doesn’t need the imposing Sheriff Baxter to be so very . . . distracting. Luckily for Eli, John Baxter is full of all kinds of good ideas, both for the town and for one stubborn librarian in particular.

Laid-back Benji Park is the keyboard player for the world’s hottest boy band, License to Game. While LtG is no stranger to charity gigs, Benji’s never been what you’d call a social justice warrior. But when smart, sexy, and ruthless immigration lawyer Jordan Kennedy comes along and asks Benji for a favor, he just may change his tune.

This book is now out of print, but I’m maintaining the book page for historic reasons. You can get my story in Dispatches!

Maddie cleared her throat. “Listen, as much fun as this is, I need to get going.” It was starting to get truly cold in her car.

“Sure. This won’t take long. I was calling to see if you’d like to do something about it.”

“The prison in Stone Gap?”

“Are you organizing a raid of some sort?” She tried to picture Adam as a modern John Brown, and it didn’t quite fit. He didn’t have a reformer’s personality; he was more the executive type.

“I’m calling to recruit you.”

People normally told Maddie she was quick witted, and normally, she thought they were right. But this conversation didn’t make any sense. “What are you recruiting me for?”

“To run for the legislature. Maddie, I want you to challenge Mike Hoagland.”

Adam Kadlick. On her phone. Trying to get her to run for elected office.

She barked with laughter. Laughed hard and long and until her stomach ached with it. “That was the highlight of my day,” she finally said to Adam. “Really. Thank you.”

“I’m glad I could amuse you.” He sounded amused himself, but she’d never fallen for his particular brand of bullshit so she didn’t believe he was. “Think how you’ll feel when you win.”

“Sure you can. I’ll be in Fallow in a few days, let’s have dinner. Don’t say no before we—”

“Maddie.” So cajoling, so tempting.

Adam had been a mansplainer before she’d known the word mansplain, and she wasn’t going to let him do it to her now. She was thirty, an attorney, and no longer awed by men who had used to be cute boys but probably weren’t any longer.

“No,” she repeated. “I have a job I love, a job where I do a lot of good. I don’t want to leave it to raise money, kiss asses, and explain why I thought it was important to defend meth cooks to my neighbor who thinks I’m a liberal slob.”

“You don’t know me anymore. You never really knew me. Which are reasons number fifty and fifty-one why I’m hanging up now.”

“I already did.” She ended the call and drove home.

© Emma Barry, 2018. Unauthorized use and/or duplication of this material without express and written permission from this blog’s author and/or owner is strictly prohibited. Excerpts and links may be used, provided that full and clear credit is given to Emma Barry with appropriate and specific direction to the original content.