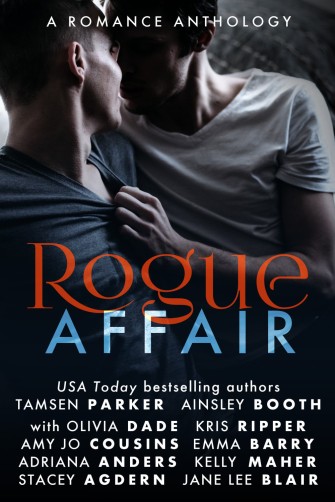 When all else fails, find passion. Ten all-new resistance romances for readers who take their happily ever afters with love, hate, and all the dirty bits in between.

Dedication of a Lifetime by Tamsen Parker

School counselor Sean wants to fix the world, or at least he’s willing to bear the weight on his slim shoulders. No social justice slouch himself, Sean’s medical researcher husband Isaiah is exhausted by one assault to decency after another. Their world is crumbling, their marriage is in trouble, and Isaiah suggests they run away from it all, but Sean balks. Will they honor the vows they made to one another or will their relationship be another casualty of the world gone mad?

Brianne can’t afford a crush on her new boss. Thanks to a storm of media attention, she’s fled her old life and desperately needs to please the aloof and demanding Astrid Dane. So she ignores the zing of chemistry every time they touch, and the ache inside each night as she tumbles into a cold, lonely bed. But as their work gets harder, and their days longer, boundaries crumble and Astrid finally puts her cards on the table with an unexpected proposal.

Work of Heart by Olivia Dade

Down-on-her-luck artist Jenny Meyers may need money, but when a detestable politician tries to pay for his portrait with charity funds, she balks…and contacts David Redi, the most trusted and swoon-worthy investigative reporter around. David knows a romance with his effervescent source would wreck his credibility, but Jenny is the one lead he can’t refuse to follow. And soon it’s not only truth, justice, and liberty at stake—it’s love.

The President’s Protector by Kris Ripper

Even the president can’t always get what she wants. Miriam West is a good president—though if you ask her, she’ll say she’s never good enough. Ram Ruiz, former Marine, current Secret Service, is a poster boy for career law enforcement. He garners some side-eyes because he’s trans, but in this administration, that doesn’t stop him from being part of the president’s protective detail (and he’s very, very good at his job). She’s the president. He’s her bodyguard. Nothing can happen between them. Until it does.

She’s an ex-chain mail bikini-wearing actress-turned-mayor of a major metropolis with a bright silver streak in her hair, and I’m a rising star political speechwriter still paying off student loans. She’s my boss, and I’m pretty sure her ex-girlfriend is looking to get back together with her anyway. I *know* nothing can happen. But somehow it’s always Anna and me huddled over my latest draft in the office at 2 a.m., and I’m starting to think I’m not imagining the heat between us…

The Fourth Estate by Emma Barry

Reporter Drew Orlov wants to write about the corrupt president hurting regular Americans, but readers only care about the bombshells penned by his rival Brynn Allen. When he goes after Brynn’s high-level source, though, he finds himself snagged on more complicated—and personal—feelings. Brynn’s been working her tail off and doesn’t have time for Drew, even if he does look good when he smolders, and they’re soon locked in a tussle for the truth with their hearts on the line.

Such Great Heights by Adriana Anders

Small town reporter O’Neal Jones is a sucker for a good story. Which is why she can’t resist following high school crush Kurt Anderson on his bizarre trip up a North Cascades peak. But when it’s time to come back down, she’s not sure she can go back to real life. Could one night with a man on a mountain change everything for this no-strings woman?

Dissent and Desire by Kelly Maher

With her future crumbling beneath her feet, Frankie Donnetta focuses on one thing she can do: help fight in the war against science. PhD candidate Rafe Steiner is at a crossroads, unsure about continuing his career with the EPA. Neither expects to see their secret crush at a meeting, but networking turns into dinner, which turns into something more. Hope in the future may be possible after all.

When the Canadian government—via hockey player-turned-diplomat Adam Klein—proposes a work around to the irrational president, legislative aide Tamara Schneider knows she needs to set them straight. She arranges a road trip to show Adam the state is bigger than just NYC, a tricky business given their history. Can she give the Canadian diplomat a second chance?

After police kill her young cousin, Rochelle Morris turns to the one high-profile person she knows to bring media attention to the cause: her high-school crush turned NFL player Jack Murphy. Jack just wants to play football, so he refuses. But as Rochelle’s righteous passion continues to affect him, he realizes that justice and the heart of the passionate woman he loves, are worth the struggle.

This book is now out of print, but I’m maintaining the book page for historic reasons. You can get my story in Dispatches!

Brynn glanced outside. Clouds had swept in, and it was starting to—

She grabbed Corey’s arm. “There he is. The hottest guy in the world.” The only notable development in her personal life since before the Orange Menace had announced he was running for president had been meeting that guy a week ago.

“Yeah, he works at MTL. He’s a beat reporter on the Hill.”

“I know.” At the very least, Brynn knew his name. She just hadn’t known the face that went with it.

Brynn’s ears were ringing. He hadn’t been hitting on her…which, of course. Of course he hadn’t been. He’d known exactly who she was, which meant he’d come over because he wanted something. Something like a lead.

“I’ll be back.” Without waiting for a reply, she marched outside. “Drew! Drew!”

The man in question was several storefronts down. At her shouts, he froze and slowly turned around. That probably wasn’t guilt on his face, but as he walked back toward her, his posture was stiff.

Catching him should have felt triumphant, but Brynn was suddenly, painfully aware that she was standing on the sidewalk barefoot with cotton balls between her toes.

He looked her over. Frustratingly, he was even more attractive than she’d remembered. “So we do meet again.”

“You’re a reporter? You’re Drew Orlov?” She was almost shivering with frustration—though that was also probably the fact the sidewalk was chilly. But how stupid, how foolish she’d been, and what a fucking mercenary this guy was.

His inscrutable expression went hard. “I never said I wasn’t.”

He hadn’t said much at all. “Are you stalking me?”

“No.” He lifted the dry-cleaning bag slung over his shoulder. “This meeting was entirely accidental, I swear. I was picking up my shirts.”

“The same way you just happened to show up at The Coffee Bar and then at my table?”

He grimaced, which was her point. Everything about this was gross.

She went on. “Did you go there because you thought I’d be getting files from Deep Throat? Do you think I’m dumb?”

Three seconds ticked by. “I don’t think you’re dumb,” he ground out.

“Only glaringly unprofessional? I have a breaking headline especially for you: I’m going to kick your ass every news cycle. I am better at this than you are, and I work harder than you do. I’m not some entitled pretty boy. Get used to losing.”

With as much dignity possible given that she was still trying not to smudge her pedicure, Brynn swished away.

Inside, Corey stood gaping. “Woodward and Bernstein don’t have a patch on you.”

“Damn straight.” Not only that, she intended to keep the promise she’d made.

© Emma Barry, 2017. Unauthorized use and/or duplication of this material without express and written permission from this blog’s author and/or owner is strictly prohibited. Excerpts and links may be used, provided that full and clear credit is given to Emma Barry with appropriate and specific direction to the original content.